What Can be the Cause of Brown Discharge Instead of Period?

Menstruation is the process of rejection and discharge of previously proliferated endometrium through the vagina. Brown mucous discharge instead of period can be associated with perimenopause, hormonal disruption, stress, etc. Another explanation for having brown spotting instead of period is implantation bleeding. END_OF_DOCUMENT_TOKEN_TO_BE_REPLACED

Can Brown Discharge be an Early Sign of Pregnancy? Dispelling Doubts

Brown discharge at early terms of pregnancy may be provoked by implantation (the egg’s invasion into endometrial lining). Usually this discharge is very scant, it appears earlier than the expected period, is not accompanied by pain, but can give rise to other early pregnancy symptoms. END_OF_DOCUMENT_TOKEN_TO_BE_REPLACED

What Are the Causes of Brown Stringy, Sticky, Jelly Like Discharge?

Brown stringy discharge in the middle of the menstrual cycle can be normal, but in most cases it is caused by pelvic inflammatory diseases, endometriosis, uterine fibroids, polyps, cervical diseases or threatened abortion during pregnancy. END_OF_DOCUMENT_TOKEN_TO_BE_REPLACED

Stringy Discharge: Why Does My Vaginal Discharge Turns Stringy? 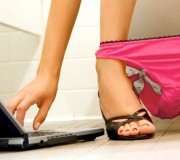 Stringy discharge: when women inquire about it or seek more information on this subject they tend to believe that this kind of discharge is somewhat strange and may be abnormal. That’s a very correct approach, meaning to be interested in functioning of your reproductive organs. Understanding which phenomena are normal and which should be corrected is a key to the right and timely reaction when something really goes wrong. So, let’s see why your vaginal discharge may turn stringy. END_OF_DOCUMENT_TOKEN_TO_BE_REPLACED